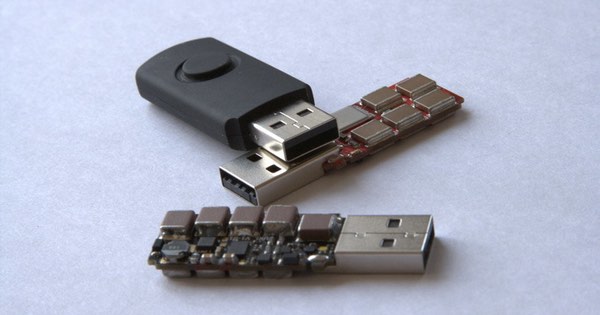 ‘Dark Purple’ the Russian security researcher has created a killer USB drive, the device works instantly in the demo video he posted online, killing his laptop in the process!

The device is able to incapacitate almost any equipment equipped with a USB Host interface.

Expert computer security analyst Graham Cluley has said ‘USB Killer v2.0 – Yet another reason not to plug a USB stick of unknown origin into one of your computers’.

The device is the second generation ‘killer thumb drive’ the researchers have created, although the first was lower-powered, with only 110v. The researchers say he has no plans to sell or use the device, says it was ‘like an atomic bomb: cool to have but cannot be used’. Check out the video below to see the Killer USB drive in action.

Dark Purple says that you shouldn’t worry too much about his broken laptop. He claims that “he will live” and a new motherboard is on the way. He thinks it is “extremely unlikely” that the hard disk was damaged, and so it should still be possible to access the data stored on the drive.

That’s good news, of course, as the data you store on your computer’s hard drive is probably more valuable to you or your business than the hardware itself.